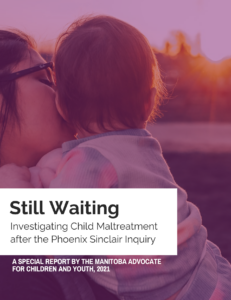 Phoenix Sinclair would have turned 21 years old this year. Fifteen years after her death and seven years after the release of the public inquiry into her death, major changes have occurred in the child welfare system. Yet, we are still waiting for the system to consistently support families to keep children safe.

What you will read in this special report is that while large-scale change has occurred and continues to unfold, the needs of children and youth are not always prioritized and consistent and equitable services remain out-of-reach for too many families.

Despite the massive public inquiry into Phoenix Sinclair’s death and the 62 recommendations that were made from that evidence, children are still dying of maltreatment similar to what Phoenix experienced. For example, between 2008 and 2020, there were 19 Manitoba children under the age of five who were maltreated and died. Their lives inspired this special report and five recommendations from the Advocate for policy improvements.