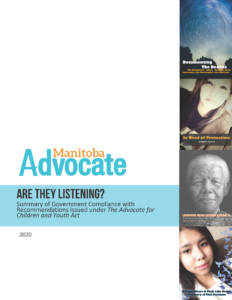 Over 2-year period, 2 recommendations were fully implemented, while 43 per cent had positive compliance assessments.

WINNIPEG, MANITOBA, TREATY ONE TERRITORY – After two years of tracking government progress on recommendations from her special reports, the Manitoba Advocate for Children and Youth (MACY) Daphne Penrose released her first public compliance report today. Are They Listening? summarizes the provincial government’s responses to the Advocate’s recommendations issued in 2018 and 2019.

Only 43 per cent of Penrose’s 23 recommendations issued in 2018-19 have achieved positive compliance results so far. Just two of the recommendations have been adopted in full by Manitoba Justice.

The 23 recommendations were issued in the first four special reports under The Advocate for Children and Youth Act, which came into force in spring 2018. The 23 recommendations were from: Documenting the Decline: The Dangerous Space Between Good Intentions and Meaningful Interventions (2018), In Need of Protection: Angel’s Story (2018), Learning from Nelson Mandela: A Report on the Use of Solitary Confinement and Pepper Spray in Manitoba Youth Custody Facilities (2019), and A Place Where it Feels Like Home: The Story of Tina Fontaine (2019).

“These recommendations are extremely important because they are based on extensive investigations and evidence and reflect the voices and experiences of children and youth who have been injured or who have died in our province,” Penrose said. “When implemented, these recommended changes can improve the lives of young people who are currently facing these very same situations.”

Of all the government departments monitored by the Advocate, Manitoba Health, Seniors and Active Living had the lowest compliance rate, with an average of 25 per cent. The department’s compliance on recommendations to improve mental health and addiction services lags behind and has not progressed significantly since the recommendations were issued. MACY’s child death reviews and investigations team continue to see this as an area with significant gaps for children, youth, young adults, and their families in Manitoba.

Overall, the Justice department has an average compliance rate of 50 per cent. There is still significant work to be done on the issues of segregation and solitary confinement use in youth custody facilities.

Manitoba Education and Training and Manitoba Families had mid-level compliance rates at 38 per cent and 35 per cent, respectively. Full assessments of each of the recommendations are available in the compliance report.

The Manitoba Advocate is encouraged by improvements in compliance assessments year-to-year. Overall, 70 per cent of recommendations showed some movement over the last year from 2019 to 2020.

In 2018, the provincial government transferred recommendation-tracking responsibilities from the Manitoba Ombudsman to MACY, with the implementation of The Advocate for Children and Youth Act.

The Advocate’s compliance assessment scale is adapted from a model developed by the European Systemic Risk Board, an independent oversight body of the European Union, and provides a colour-coded, 7-point scale to track compliance. Each recommendation is given a compliance level based on information given by government to the Advocate’s Quality Assurance team: fully compliant (green), largely compliant (light green), partially compliant (yellow), limitedly compliant (orange), insufficiently explained (red), non-compliant (red), or alternative solution (blue).

As mentioned, only two recommendations to Manitoba Justice – enhancing oversight of pepper spray use and communicating victim service benefits to children, youth and families – have been given a ‘fully compliant’ (green) assessment to date.

About MACY: The Manitoba Advocate for Children and Youth is an independent office of the Manitoba Legislative Assembly. It represents the rights, interests, and viewpoints of children, youth, and young adults throughout Manitoba who are receiving or entitled to public services, including child and family, adoption, disability, mental health, addictions, education, victim supports and youth justice. The office does this by advocating directly with children and youth, or on their behalf with caregivers and other stakeholders. Advocacy also involves reviewing public services after the death of any young person when that young person or their family was involved with a reviewable service as defined in The Advocate for Children and Youth Act (the ACYA). Additionally, the Manitoba Advocate is empowered to make recommendations to government, conduct child-centred research, disseminate findings, and educate the public on children’s rights and any other matter under the ACYA.