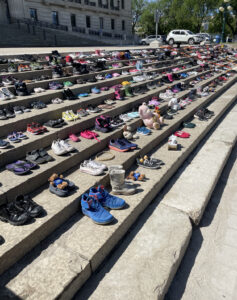 Children’s shoes lined the steps of the Manitoba legislature on May 31, 2021.

“Waking up last week to hear the news that bodies of 215 Indigenous children had been discovered in an unmarked grave on the site of the former Kamloops Indian Residential School has unleashed a wrenching sadness within. I want to express my profound sorrow and grief – and that of MACY staff – over this enormous loss and offer condolences to the families involved, as well as Tk’emlups te Secwépmc First Nation. Once again, we witness another example of the genocide committed against children and their families, the original Peoples of these lands.

Earlier this week, I stood with the Knowledge Keeper from our office, Cheryl Alexander, at the steps of the Manitoba Legislature in grief with community and survivors. We went to honour and give gifts, offer tobacco, and to witness the display of children’s shoes that are placed on the steps of the legislature.

There, I was also reminded of the many Indigenous-led organizations, survivors, and community leaders who are actively working towards healing and community building.

The effects of residential schools and colonialism are not only historical. Indigenous children and y

outh in Manitoba continue to receive inequitable services from provincial and federal governments and continue to die disproportionately due to structural inequalities. This is harm that we see daily in our work, and for some of us, in our families and communities.

Today, as we mark the two-year anniversary of the release of the final report of the national Inquiry into Missing and Murdered Indigenous Women and Girls, I reflect on the progress made after this process, which heard testimony from 1,484 family members, 819 artists, and 83 experts, Knowledge Keepers, and other officials. Indigenous Peoples shared their stories through that process with hope that things would get better, that – finally – change would happen. The Calls for Justice included in that final report laid out a pathway to substantive equality in the areas of health, security, justice, and culture. That report and the final report of the national Truth and Reconciliation Commission of Canada from 2015 include calls for action and justice which, when finally implemented, will bring about the change that has been missing for generations. Still, progress is far too slow.

Today, we support the calls of residential school survivors, First Nations and Metis leaders and other community members who want to identify, document, maintain, commemorate, and protect former sites of residential schools where children may be buried, as outlined in Calls to Action 71 through 76 of the national Truth and Reconciliation Commission of Canada.

In 2015, when the Honourable Murray Sinclair offered remarks on the closing of the Truth and Reconciliation Commission of Canada, he acknowledged two empty chairs placed on stage were there to honour and remember the children who never came home from residential schools. Of course, as the recent discovery of a mass grave underlines, no stage would be large enough if empty chairs were set up for each child who did not make it home.

In his remarks that day, Sinclair also called on all Canadians to take up the work of reconciliation, saying that “we owe it to each other to build a Canada based on our shared future, a future of healing and trust.”

The staff from the Manitoba Advocate for Children and Youth re-commit today to listen to the wisdom of those who have stories to share and do what we can to build towards a better tomorrow. In doing so, we will never forget the 215 children who never came home from the Kamloops Indian Residential School and the many more children who have yet to be found.”

A/Manitoba Advocate for Children and Youth