WINNIPEG, TREATY ONE TERRITORY, HOME OF THE METIS NATION – The Manitoba Advocate for Children and Youth’s Youth Ambassador Advisory Squad (YAAS!) has revealed the first of 42 planned murals dedicated to children’s rights, all of which will be located throughout Manitoba.

For more than a year, YAAS! has been hard at work developing The Re-Right Project. This youth-led initiative will see 42 murals go up around the province, with each mural depicting a specific child’s right as laid out under the United Nations Convention on the Rights of the Child (UNCRC). YAAS! hopes the project will lead to more public awareness about child and youth rights.

“I think a mural catches your eye quicker. You’re choosing to look at it because it’s pretty and it’ll educate anyone who looks at it,” said Sophia Stang, who co-led the project for YAAS!.

YAAS! is a group of youth ages 14-22, who were brought together through the Manitoba Advocate for Children and Youth office. The group aims to amplify youth voices in the province and ensure youth perspectives are being heard at decision-making tables. The Re-Right Project was an idea brought forward by a young artist, who participated in YAAS!.

“It’s important for youth to lead their own projects and have a say in what they’re doing because, after all, it’s more rewarding and gives us experience,” said Rose Fontaine, one of the YAAS! project co-leads.

The first mural is located on the building at Neecheewam Inc. (591 Sherbrook St.) and illustrates UNCRC Article 31: Children and youth have the right to play, rest and enjoy their lives. On the mural, children and youth are seen playing around a carnival scene, which was inspired by a trip to the Red River Exhibition. YAAS! also included details that pay tribute to Missing and Murdered Indigenous Women and Girls (MMIWG) and the 215 children whose remains were found buried near a residential school in Kamloops, B.C. this year.

Acting Manitoba Advocate for Children and Youth Ainsley Krone shared one reason why Article 31 was chosen as the first to be depicted.

“Sometimes, as adults, we forget that children can just be children,” Krone said. “We’re always training them for the future, prepping them for their adulthood. Article 31 of the UNCRC is about children just being children and having the opportunity to just be kids, to not worry about the future and just have fun today.”

YAAS! and the Manitoba Advocate are excited to see this long-term project get underway with initial support from Neecheewam. They also thank Take Pride Winnipeg and artist Annie Bergen for their support in developing the first mural, with assistance from the West End BIZ and Herc Rentals.

YAAS! and MACY are looking forward to collaborating with other youth-serving organizations and partners across the province to create murals in as many communities as possible. For others interested in developing a mural or getting involved, please reach out to the Manitoba Advocate office by phone (1-800-263-7146) or email (info@manitobaadvocate.ca).

To see a video about The Re-Right Project made by Enjoy Creative, please visit: https://youtu.be/OduhPH23xgw 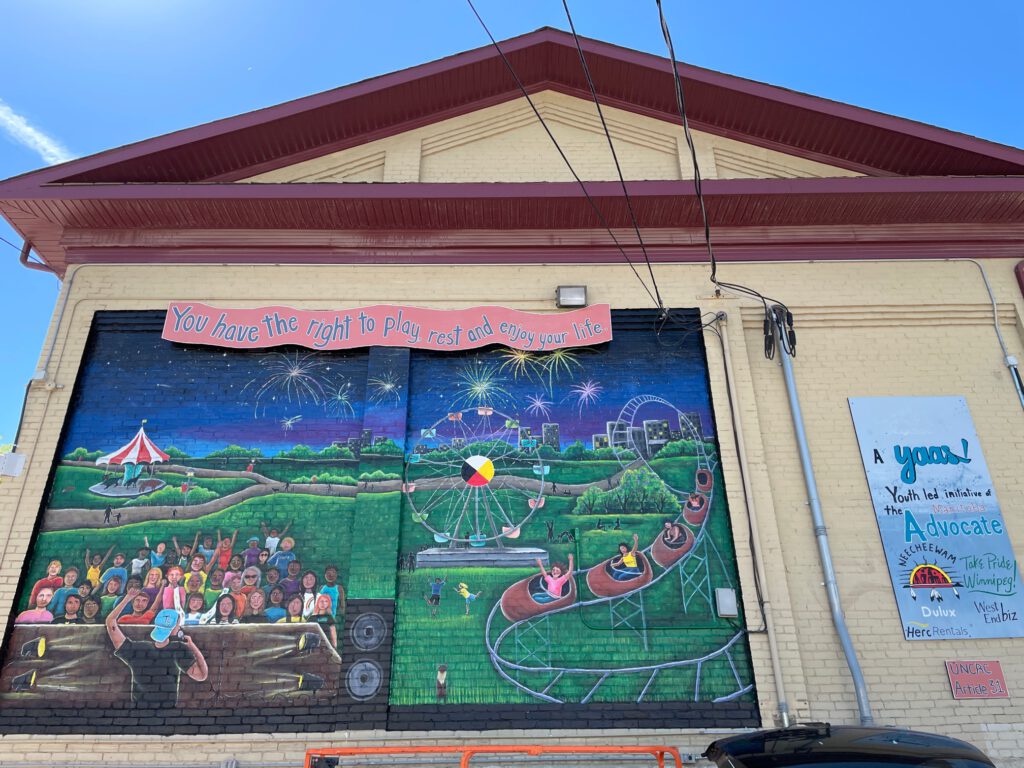 The first mural of The Re-Right Project is painted on Neecheewam Inc. (591 Sherbrook St.)

About MACY: The Manitoba Advocate for Children and Youth (MACY) is an independent, non-partisan office of the Manitoba Legislative Assembly. It represents the rights, interests, and viewpoints of children, youth, and young adults throughout Manitoba who are receiving or entitled to public services, including child and family, adoption, disability, mental health, addictions, education, victim supports, or youth justice. The office does this by advocating directly with children and youth, or on their behalf with caregivers and other stakeholders. Advocacy also involves reviewing public services after the death of any young person when that young person or their family was involved with a reviewable service as defined in The Advocate for Children and Youth Act (the ACYA). Additionally, the Manitoba Advocate is empowered under provincial law to make recommendations to government and other public bodies, conduct child-centred research, disseminate findings, and educate the public on children’s rights and any other matter under the ACYA.

About YAAS!: The Youth Ambassador Advisory Squad (YAAS!) is an initiative of the Manitoba Advocate for Children and Youth that works to create change and improve the effectiveness and responsiveness of services provided to children and youth in Manitoba. YAAS! does this through its regular squad meetings where they provide feedback and opinions on issues, reports, projects, and the many activities underway at MACY. YAAS! is made up of youth ages 14-22 from across Manitoba who have current and past lived experience in the service areas for which MACY has responsibilities. YAAS! is guided by the United Nations Convention on the Rights of the Child, the Seven Teachings, their own experiences, and the experiences of their peers.